Last season, Mr. Ferring returned to the Ensemble of the Ryan Opera Center at the Lyric Opera of Chicago. Performances during the season included Older Brother in Dead Man Walking and Tchaplitsky in Queen of Spades while covering Count Almaviva in Il barbière di Siviglia, Don Ottavio in Don Giovanni, and Major Domo in Queen of Spades. This season, Mr. Ferring was scheduled for an anticipated debut with Santa Fe Opera as Tamino in Die Zauberflöte, as well as his company debuts in the same role with North Carolina Opera, New Orleans Opera, and Pittsburgh Opera. Mr. Ferring was also scheduled to perform Beethoven’s Mass in C with the Grant Park Music Festival, but sadly, due to COVID-19, these productions were cancelled. Mr. Ferring did perform this season as Walther in Tannhaüser at Opéra de Rouen Normandie. In concert, Mr. Ferring he joined the Jacksonville Symphony Orchestra for Händel’s Messiah in December.

Mr. Ferring will make numerous Metropolitan Opera debuts in 2021-2022, including performing Tamino in Die Zauberflöte, Pong in Turandot, and Arturo in Lucia di Lammermmoor. Mr. Ferring is also scheduled to perform at Santa Fe Opera in the summers of 2022 and 2023, and scheduled to perform leading roles at Opéra National du Rhin, Opera de Rouen Normandie, and Opéra National de Paris in upcoming seasons.

Performances during the 2018-2019 season at Lyric included his principal role appearance as Lurcanio in Ariodante with Maestro Harry Bicket, for which the Chicago Tribune declared him “the most noteworthy solo breakthrough of the production,” as well as the Young Servant in Elektra and both Gastone/Giuseppe in La traviata. Ferring also covered roles in Idomeneo (High Priest) and Cendrillon (Dean of the Faculty) and was seen in concert for Beethoven’s Ninth Symphony with the Evansville Philharmonic.

In the summer of 2019, Mr. Ferring joined the Britten-Pears Young Artist Programme for their Opera Arias course under the tutelage of Maestro Antonio Pappano, the Académie du Festival d’Aix, and the Verbier Festival’s Atelier Lyrique program where he performed Tamino in Die Zauberflöte, as well as Die Erscheinung eines Jünglings in Die Frau ohne Schatten under Maestro Valery Gergiev.

During the 2017-2018 season, as a Pittsburgh Opera Resident Artist, Mr. Ferring performed as Spoletta in Tosca, Basilio/Curzio in Le nozze di Figaro, Ricky in The Long Walk, The Protagonist in the world premiere of Ashes & Snow (now known as Savage Winter) in collaboration with American Opera Projects, Flask in Moby-Dick, and Nemorino in L’elisir d’Amore. During the tenor’s first year as a Pittsburgh Opera Resident Artist, he performed Gastone in La traviata, Fourth Jew in Salome, and Señor Alcalde in the world premiere of The Summer King. Mr. Ferring was an Apprentice Singer at Santa Fe Opera where he covered Oronte in Alcina and was awarded the 2017 Richard Tucker Memorial Scholarship.

Heralded by the Boston Musical Intelligencer for being “powerful and direct…while conveying a range of conflicting emotions with distinction and subtlety” and by having a “bold precision to his substantial sound,” Mr. Ferring has been seen at many prestigious summer programs and received a number of awards.

In the 2015-2016 summers, Mr. Ferring appeared at Opera Theatre of Saint Louis as a Gerdine Young Artist performing Parpignol in La bohème, Zahir in Shalimar the Clown (world premiere), as well as covering Scaramuccio in Ariadne auf Naxos and Prunier in La rondine. While at OTSL, Mr. Ferring received a career award from the Richard Gaddes Fund for Young Artists given in recognition of his great vocal potential. Mr. Ferring has also been a Studio Artist at Wolf Trap Opera performing Lacouf in Les mamelles de Tirésias and covering Remendado in Carmen. Mr. Ferring was a Young Artist at both the Seagle Music Colony and Cedar Rapids Opera and performed numerous roles with both companies.

A multi-talented artist, Mr. Ferring is also an accomplished conductor, having conducted To Hell and Back, Old Maid and the Thief, A Chorus Line, Sweeney Todd, Anything Goes, and A Little Night Music, as well as assistant conducting productions of Iphigénie en Tauride and Le nozze di Figaro.

Mr. Ferring was the recipient of Third Prize at The 2020 Glyndebourne Opera Cup, a Sara Tucker Study Grant from the Richard Tucker Foundation and has received a Career Grant from the Sullivan Foundation, First Prize from the National Society of Arts and Letters, Top Prize from the American Opera Society of Chicago, Third Prize at the Gerda Lissner Foundation International Voice Competition, three Metropolitan Opera National Council Auditions District Encouragement Awards, as well as a Regional Encouragement Award from the Great Lakes Region. 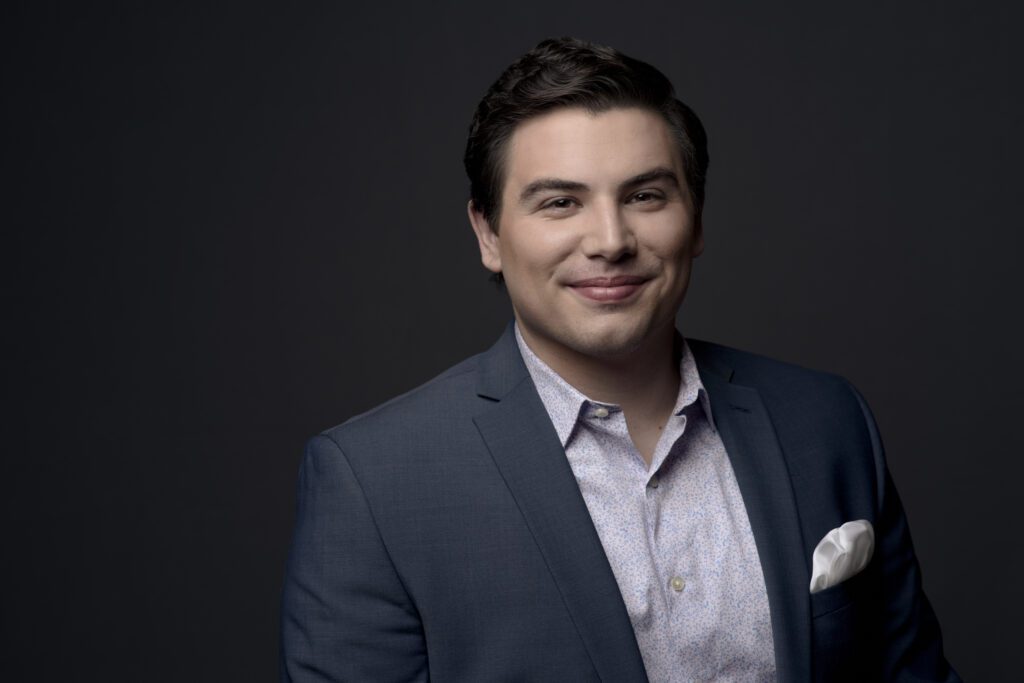